We organized a day trip to Kent county. The weather was horrible on this day. I caught the worst day during my stay in England. When it's drizzling or soft rain, it is normal, but we had heavy rain all day. So we could look at the Canterbury Cathedral only. 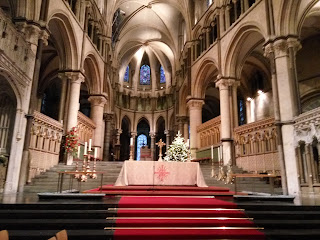 I tried to look around the countryside from our car in the rest of the time.
I think, Canterbury is a very nice, a charming medieval town in summer, I have to see the town once more. 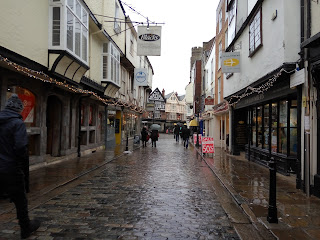 The entrance of the Cathedral is in the downtown, beside a nice little square. 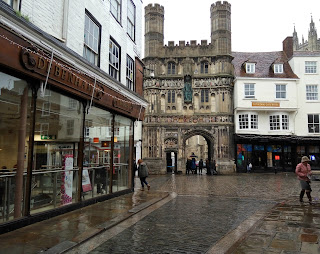 It's one of the oldest and most famous Christian cathedrals in England.
Here is the home of the Anglican bishop. The building has been a World Heritage Site, since 1988.
The archaeologists have found remains of an earlier Saxon cathedral and a Roman fortress under the nave. The Kingdom of Kent was converted to Christianity in 597.
In that year Pope Gregory I. sent st Augustine to Canterbury, 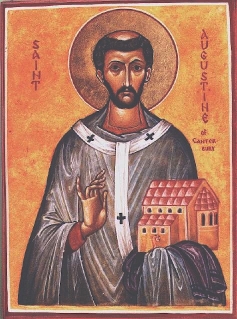 who became the first bishop of the Cathedral. They already minted golden coins in 603.
Canterbury became famous all over Europe because of Thomas Becket's murder in 1170. 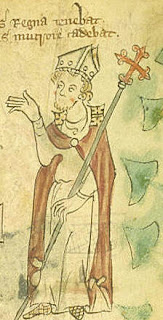 According to the legend Becket's parents were a Norman knight and a Saracen noble girl. His parents sent him to learn to London, Oxford and later to Paris. 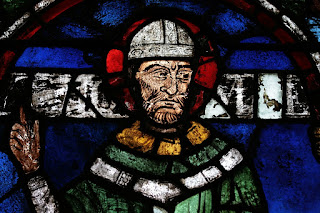 After returning home he lived at court of the Archbishop of Canterbury, who sent him to Rome twice. During his travels he also studied law in Bologna.
King Henry II. 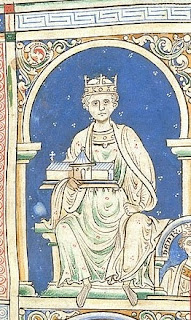 appointed him as chancellor in 1157 and an intimate friendship was formed between them. Becket led a life of luxury with his household. After the Archbishop of Canterbury's death the King appointed him as archbishop and primate of England, but he protested against.

The King believed that if his friend becomes the archbishop, it will be possible to continue his activities against the Catholic Church. Finally it happened differently. Becket abandoned his luxurious life , and he dressed in a monk gown. Henceforth, he protected the interests of the Church against the King. The friendship between Becket and the King was changed into hate. Finally 4 English noblemen killed him during his prayer in the cathedral in 1170. 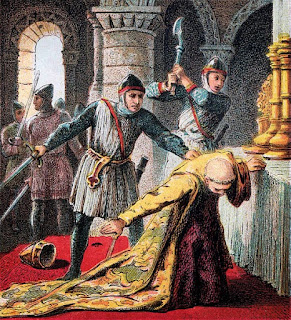 The instigator was the King. His body was buried in the cathedral. The pope canonized him in 1172. Henry VIII. demolished the chapel where there was Becket's tomb. His body was burned and his ashes was scattered in the near river. 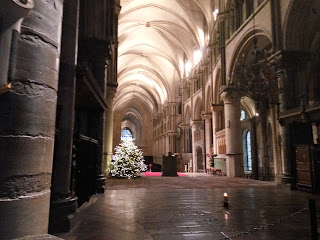 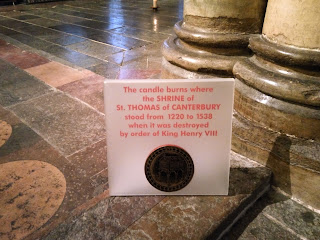 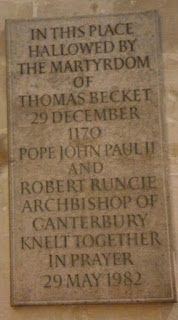 Above the entrance there are 14 bells and chimes in the tower. In the eastern crypt there are remains of the former Romanesque church. Becket's remains kept here first time, they were moved in another chapel in 1220. The painted windows are from the 12. century mostly. 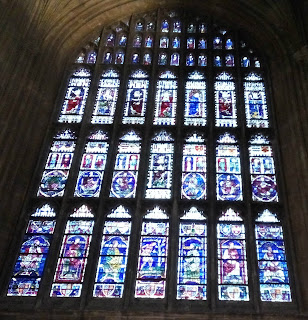 The following was buried in the cathedral: eg. Edward, Prince of Wales (1330-1376) who was called the "Black Prince" because his armour was always black. 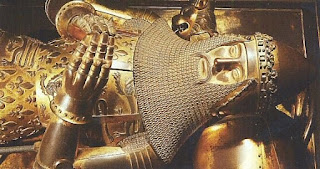 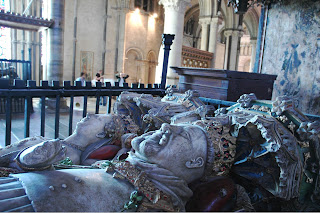 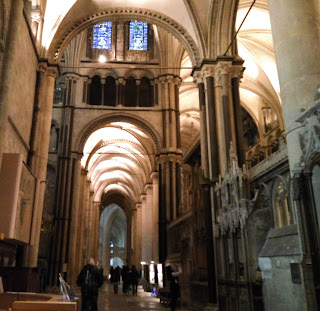 I recently spent one month in England including Christmas and New Year's Eve. These were some very nice days because I could spend a lot of time with my family. When I wasn't with the family, I saw beautiful sights in my free time. Unfortunately I had fewer possibilities to travel because some places of interest were closed during winter time. On the whole I have had a great time and I have seen plenty of great sights. What I didn't see because of the bad weather, I'm going to look at in this summer.
I have been to London several times, but there are still some remaining parts of the city where I have never been. I always make a plan before my trips, but something is always left out.
I read some books and I saw some movies about the Knights Templars, 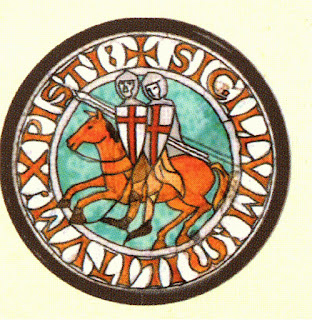 so I looked at the Temple district. This area is called "district of lawyers". It'll turn out later, why.
I went from the Blackfriars train station 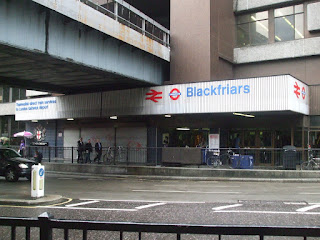 to the Temple Court through the Tudor Street. The name of this area was Alsatia between the 15th and 17th century. It became the refuge for criminals. The authority had no right to take actions here, so this was the worst quarters of London. Daniel Defoe also found refuge here in 1692, when he was wanted by the police because of his writings. Alsatia kept its independence till 1697.
You can go to the eastern Gate of the Temple through the Tudor Street. 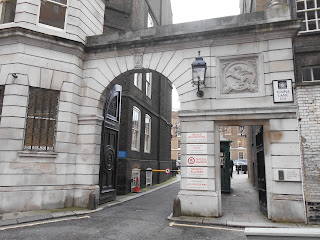 This area got its name from the Order of the Knights Templars. The Order of Templars was established in 1118 to protect the pilgrims who went to the Holy Land and to Jerusalem . 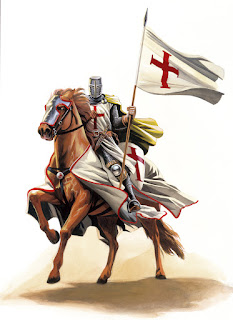 The Spanish branch of the Order settled down in the centre of the northern shore of the Thames. The church was originally built in the round form. The original model (sample) was the Holy Sepulchre Church in Jerusalem. Later it was widened with a rectangular part. 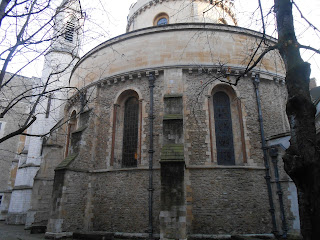 The Order of Templars was disbanded in 1312. King Edward II. confiscated their estates and gave those to the Johanniter Order. Edward III hired out the area of the Temple for lawyers. 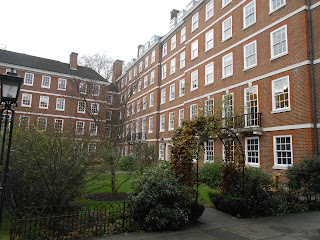 King Edward II. was executed in 1327. The Major of London became the owner of the area in this period. Henry VIII dissolved the monastic orders in 1541 and confiscated their possessions James I. gave the whole area to the lawyers in 1609. Here the four Lawyers Colleges of London were established later. 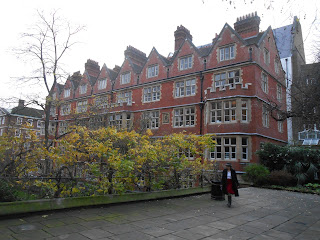 This area was almost completely destroyed during the Second World War.. The reconstruction lasted till the 1960s. The area is for the lawyers today again. Beside the lawyer's colleges there are also lawyer's offices, legal directories and law societies,
The most famous building is the Temple Church. 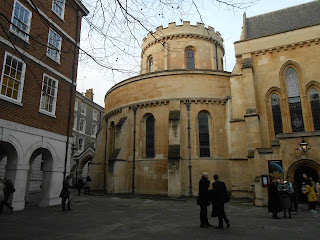 This is one of the five medieval English round churches. The others are located in Cambridge, Northampon, Maplestead and Ludlow.
The church was consecrated by the patriarch of Jerusalem, Heraclius in 1185, during Henry II's reign. In the crypt the secret initiation ceremonies were held. 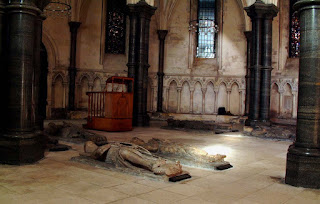 We can see the penitential cells up to this day, where the Irish Walter le Knight, former Commander of Bachelor starved to death in 1301 because he disobeyed for Grand Master. 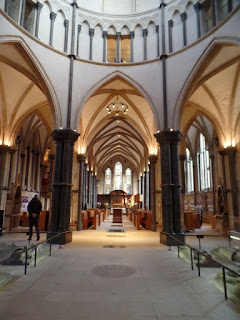 Sir Christopher Wren renovated the church after the Great Fire of London in 1666. The organ was also built at this time. The building was restored three times in the 20th century, mostly it's designed with stones from Bath. 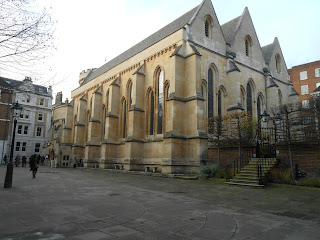 A column stands in front of the church. You can see a Templar symbol on top of the column : two knights sit on same horse. This statue was erected in 2000, in the place where the Great Fire of London stopped. 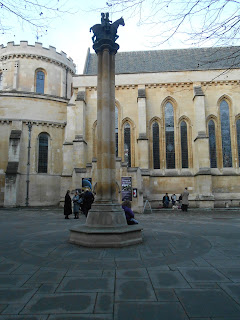 I also wanted to look at the Middle Temple Hall 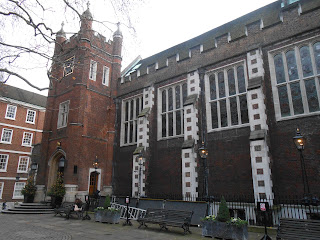 because it's a beautiful building as we can see on the following poster. 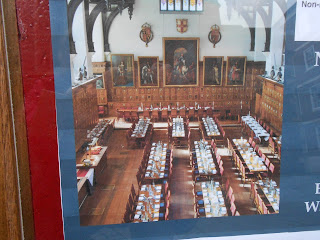 Unfortunately it was unsuccessful. The building cannot be visited only when minimum a 10-person group is registered in advance.
The Temple Hall was built in the 16th century. Today it belongs to the college of lawyers, there is the canteen and meeting places of law students
There was the first performance of Shakespeare's "Twelfth Night," in 1602.