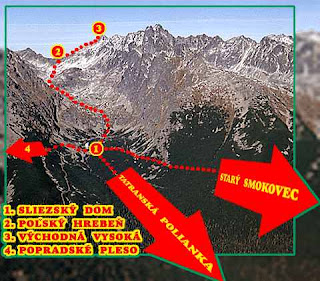 Maybe a year ago, I read on the net that under Gerlachovský peak an alpine meadow marmots live. I like marmots and a couple of times they have managed to close up to see, we decided to go to the Carpathian Mountains. 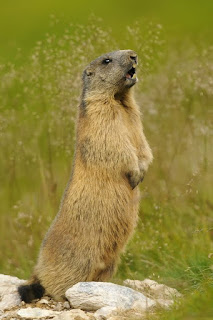 March, we have already booked accommodation, and we waited to the start. On Tuesday we left early to Tatranska Polianka. We found the winding forest road to the hotel. The 7-km road leads trough the Tatra National Park, but they can use by cars, who have been booked hotel rooms. 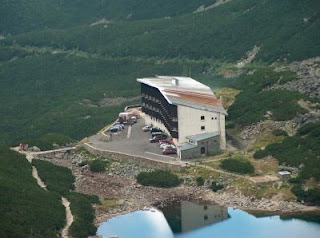 The Sliezsky House (1670 m above the sea) is a mountain hotel situated at the threshold of the Velická Valley, on the bank of Velické Mountain-lake. The first stone chalet was on the eastern end of the lake (1871). In March 1874 a show avalanche destroyed it. In 1878 another small wooden shed was built on the southeastern bank of the lake. Porters and mountain guides often used it even after the Ungarn-Carpathian Association built up the Sliezsky House in 1895. The building was rebuilt and modernized several times (especially between the years 1957 - 1960), but it completely burned down in 1962. Since 1968 at the same place, there is a modern mountain hotel of the same name.
When we arrived, was there 10 degrees and overcast skies. After unpacking we walked around the lake and climbed a few meters from one trail to close up look at the waterfall. 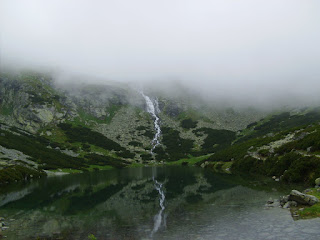 On Wednesday was heavy rain, dense clouds came and went.
Sometimes it cleared, we began to hope, but the situation is changed every 10 minutes, sometimes worse sometimes even worse:). 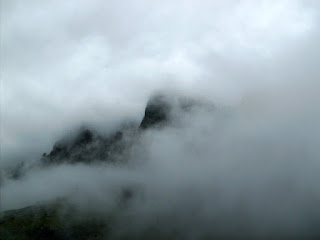 Thursday morning, the sun is shining, although was only +5 degrees. We had a quick breakfast and we headed up the Kvetnica (Flower Garden), where marmots live. The Flower Garden there is on the upper Felkai valley, beside the "Eternal Rain" , 1820-1840 m above sea level. There once was a lake, is now alpine meadow mostly , from the surrounding mountains plunging waters running to the Lake Felkai. We went just 15 minutes, the heavy rain began. You could not escape nowhere. When a little rain fell, we went forth, but then the clouds began to run up. 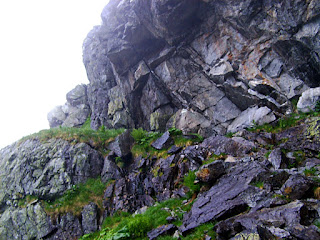 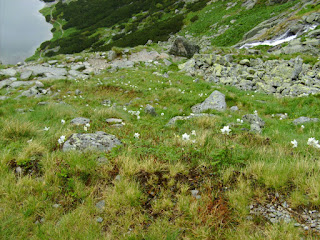 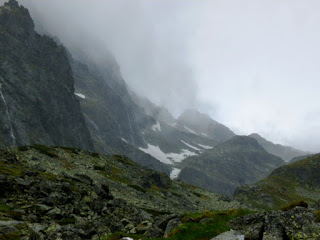 Maybe half an hour only, when we had no rain and no clouds. Quickly we made ​​some photos and we went in behind the cliffs, to wait for the marmots. We found lots of marmots housing, but no one came out. 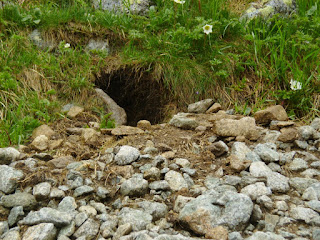 3 hours later we went back. In time the path was longer, than up, the wet rocks was very slipped. In the hotel we took down all wet clothes, a heavy rain started again. Friday was our last day . The hurricane is not abated, but at least the rain stopped morning. 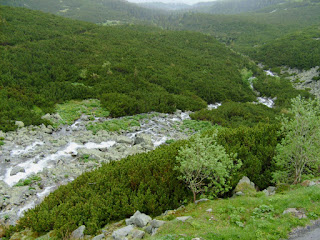 We breakfast, we packed up, paid and we had the best idea to go home. We descended to 600 m to Tatranska Polianka, here was a nice wether almost. Along the way we had lunch in city Brezno, then we returned home felicitously.
The trip was a bit adventurous, but the mountains were very beautiful as it is.
Bejegyezte: Mobi dátum: 8:17 PM No comments:

About 10 days ago, preparing for an easy hike.We met with our friends in front of the Botanical Garden Vácrátót on Saturday. 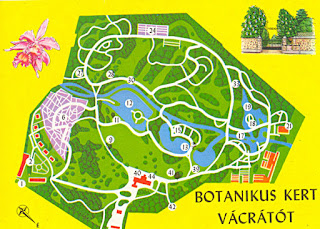 The largest botanical garden in Hungary is home to 13,000 species of plants only 25 kilometres away from Budapest. The gardens was the brainchild of a sentimental earl, Sándor Vigyázó 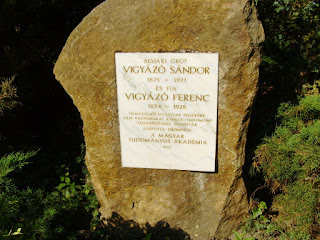 who transformed the Vácrátót estate and its average-looking English garden. While wandering along the intimate trails under almost 200-year old trees, through fields filled with 2800 species of flowers, among rose and genarium collections, you’ll meet 62 types of nesting birds, 22 types of fish and 73 mollusk species inhabiting the garden and its waters. 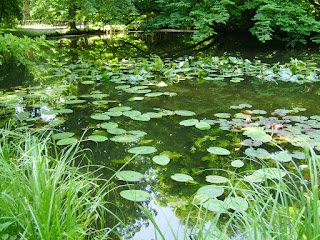 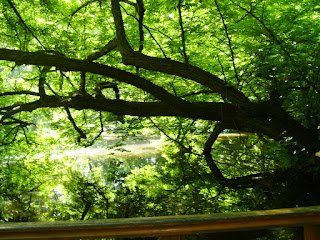 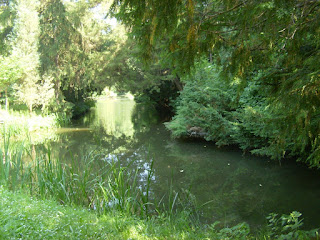 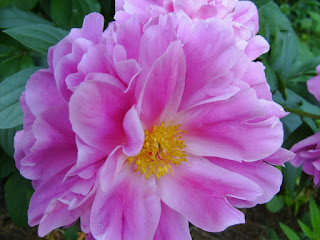 We were walking in the garden is almost one and a half hours. Then we headed on foot to Veresegyház. The weather was very hot, so we rest next to a fishpond at the pub. :) 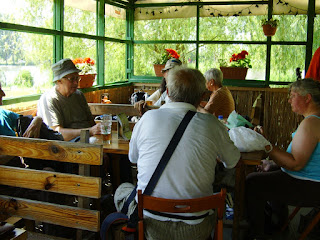 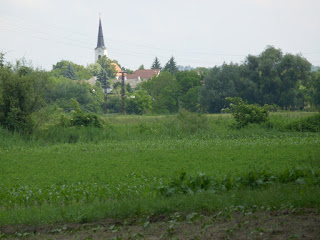 Veresegyház is town with almost 14,000 inhabitants 23 km from Budapest, in one of the valleys of Gödöllő hill-country. It is a settlement founded in Árpád´s age, first mentioned in documents in 1375. The Roman Catholic church was built in the 18th century, in the style of the age of Louis XVI. in France, with a Golgotha statue of baroque style in the garden. The village is also decorated with the statue called "Mother" made by the famous sculptor, Pál Kő. There are ponds suitable for bathing and angling in the neighbourhood of the village. Park of statues in the vicinity of the ponds with the works of the Japanese sculptor, Mitsui Sen. A warm-water medicinal bath awaits visitors during the whole year. A swimming pool is available for visitors in the territory of the elementary school opened in the evenings on weekdays and all day at weekends. Sights of the village include the Bears´ and Wolves´ Home with 42 bears and 20 wolves, located in natural environment in Külső-Patak Street.
We looked for our girlfriend's house, there was already ready for a delicious goulash. 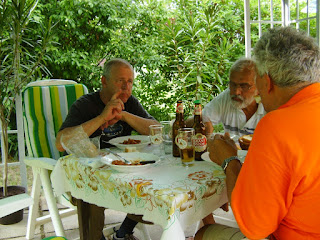 Until evening we talked and drank fine wines, then we build up the tents. 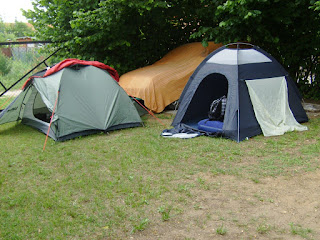 In the morning wasn't in hurry nobody.:)
That was almost 11 o'clock am, when we start home. The walk was about. 4 km. We found the station of light rail, from here we arrived back home quickly. 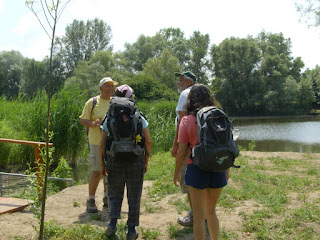