Last week we visited the Royal Palace in Gödöllő. The weather was very nice and sunny in the middle of November. We went by suburban train. The journey take about one hour.
The Royal Palace of Gödöllő is located about 26 kilometersNortheast of Budapest . The Palace is the largest baroque palace in Hungary and the second biggest surfaced palace after Versailles. The building was  designed by András Mayerhofer in the 1740's. 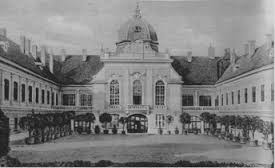 The Palace was ordered by Count Antal Grassalkovich in 1773. 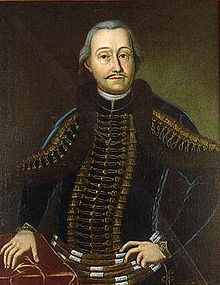 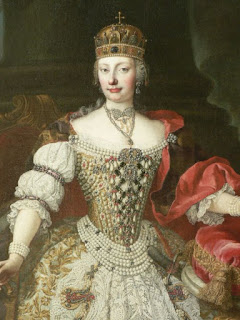 During the Austro-Hungarian Empire, the building served as a summer residence for Emperor Francis Joseph and Queen Elisabeth between 1867 and 1916. The royal couple spent a lot of time there, especially empress Elisabeth with her children. 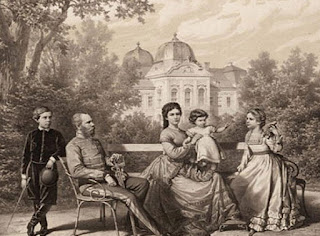 The palace was used as summer residence by governor Miklós Horthy between 1920-1944. 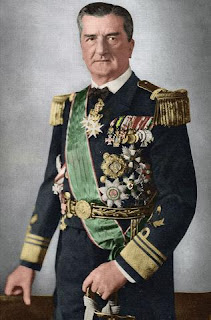 After World War II, the Soviet Union occupied Hungary and confiscated the royal palace. The beautiful symbol of the former monarchy was used as a barracks for Soviet troops and later there was a nursing home for the elderly.  By the time Hungary declared independence from the Soviet Union in 1989, Gödöllő Palace was in a terrible state of disrepair. 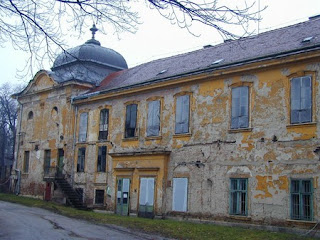 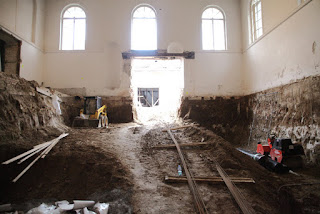 Recently, the castle was beautifully restored to its original splendour. 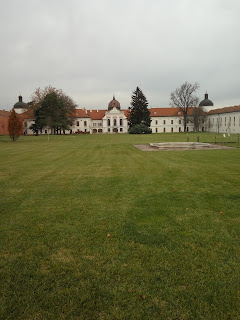 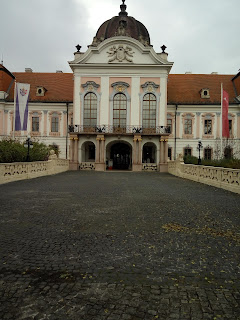 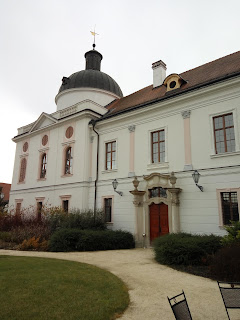 The Grand Hall is resplendent in white and gold painted rooms, a red marble bath, conservatory, a riding school, a baroque theatre and a large park. 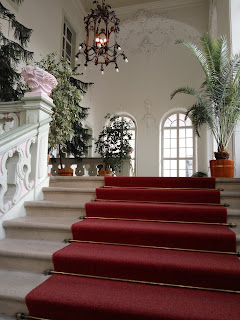 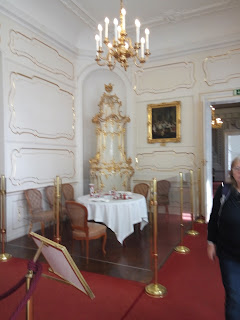 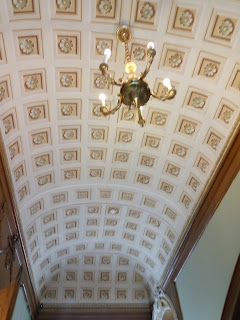 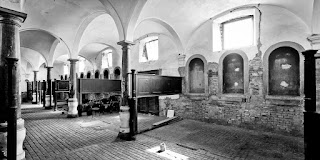 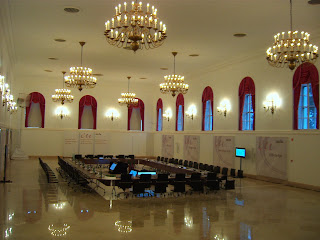 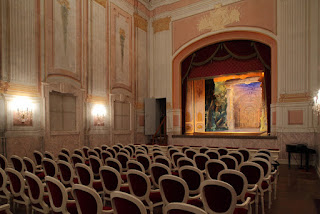 The palace gives home a permanent exhibition, as well as seasonal exhibitions of the historical and contemporary art all year round.
Bejegyezte: Mobi dátum: 12:53 PM No comments:
Címkék: Gödöllő, history, travel

In the Castle Garden Bazaar I was last time at the end of the 70s. At this time here was the famous Ifi Park ( Youth Park ) Many - later they became a classics - beat bands came here to play first time in front of a big audience. The park was closed down on 23rd September 1984. I read a lot that it will be newly renovated, but the years passed and it looked quite deplorable  at the foot of the castle. Now I had an opportunity to visit the rebuilt garden with my cousin again. 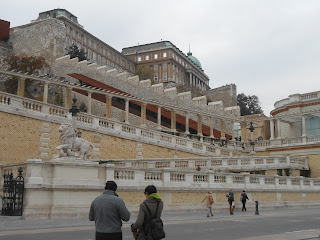 In the 19th century Pest was in progress, but no development happened in Buda, so the reconstruction of the area in the neighborhood of the Chain Bridge (Lánchíd) and the Castle has been decided in 1872-1873. In order to have place enough for the construction of Castle Garden Bazaar (Várkert Bazár) all the old and ruined small houses had to be demolished. The Castle Garden Bazár (Várkert Bazár) was build between 1875 and 1883 in Neo Renaissance style. 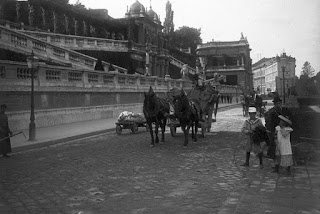 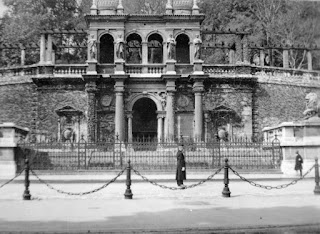 In the 2nd World War many parts of the Bazaar were destroyed (lions at the gate, statue of winter, pergola, vases and paintings of the recesses), caused by a bomb attack in the neighborhood. In the 1950s, the original condition was planned to be restored, but it wasn't successful (original parts were demolished, concrete stairs were built and during the restoration the scales were missed). From 20 August, 1961 to 1984 the Youth Park was operated here where several concerts were held. 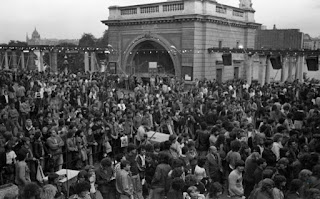 However, the place finally had to be closed down due to the continually deteriorating structure of the building. 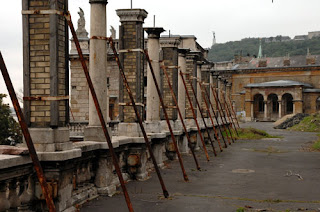 Luckily this almost forgotten gem of Budapest is fully renewed and was opened August 2014 with shops, exhibitions halls, restaurants and cafes. 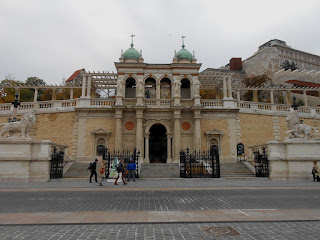 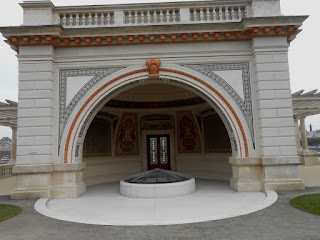 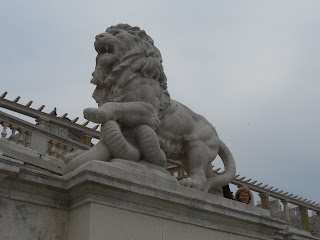 I had a pleasant surprise recently. One afternoon, my cousin called me from Transylvania, that her son leaves for Vienna by car and she would come with her. If I wait for her on the M1 motorway, she'll be able to stay a few days in Budapest. At night, at  3 o'clock a.m. I was on the way by car. We couldn't sleep a lot because the next day – 23rd October - we would have liked to see some programmes of the national holiday. In the morning we drank a lot of coffee and we went to look at the Parliament. Thanks to the free entry, the people snaked in a long line around the building. 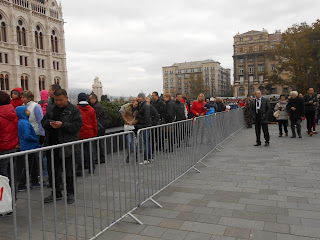 We thought that we'll to wait for one hour and if we don't get ahead, we'll go away.
Incredibly, after one hour we were at the gate. Actually we could see the crown only, and we couldn't see the complete building. 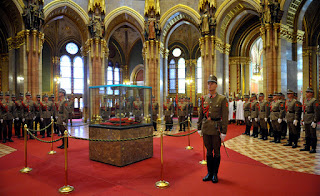 When we went out, a musical changing of the guards just started. 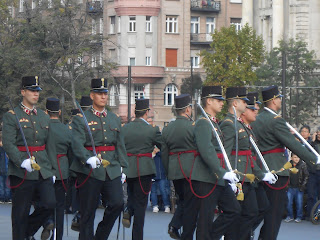 The rest of the day we made up for the missed night.

The next day we awoke to a beautiful sunny day. At the end of October one can think, perhaps this is the last beautiful weekend, so we went to hike to the Buda hills. From the Szépjuhászné ( Beautiful shepherd wife ) we climbed to the top of Feketefej (Black head) hill 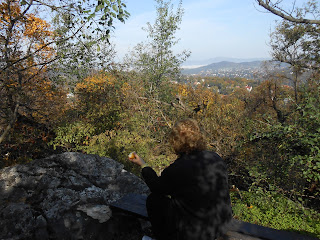 and after that we arrived through the Kecskehát (Back of goat) and Meszes (Limy) hill to Remeteszőlős (Vineyard of hermits). From here we went home by bus. 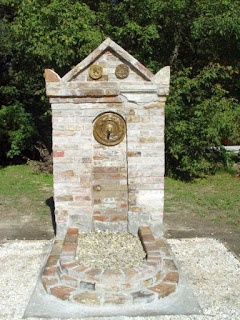