Last weekend we travelled to the Balaton highlands once more. We were unlucky, because the vintage festival was reorganize for the next weekend. Saturday morning we left Budapest by car. Our friends travelled by train. We met in Balatonszepezd. 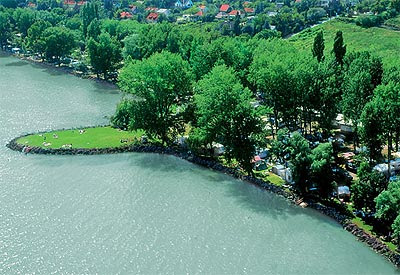 Former fishing-village of 420 inhabitants built on hills along the shore and surrounded by hills and forests. Stewards lived in the village in the 13th century, later on it was the domain of local nobles, of Veszprém Episcopate and of Somogyvár Benedictine Abbey. The inhabitants suffered a lot from the Turkish invasion were completed with German colonists in the middle of the 18th century. Szepezd beach was established by Vince Víriusz on his own domain at the centenary who gained distinction at the time of phylloxera epidemic in the protection of vineyards and in domesticating new species. First Statutes of Bathing Association of Víriusz Domain is from 1933. Roman Catholic church (the only votive church of the area) was built in the 13th century in Roman style, upon the pledge of fishermen got into a storm. The small church is erected directly above the shore on a hill, for a long period of time its white tower had showed the way home to fishermen. The Reformed church and the Evangelic one both built at the end of the 18th century in late Baroque style are located opposite to each other in the centre of the village. A former mansion of dr. Gyula Sebestyén professor of ethnography built in Irish style in Szepezdfürdő, today it is a hotel. A huge sand-stone rock scribbled all over with Székely runic writing called Heathen Stone can be seen in the garden of the mansion. Temporary exhibitions in Szepezd Gallery (Árpád street) in summer. The Roman Catholic church is floodlighted. The traditional vintage procession and merry-making is held in the village in the middle of September.

We put down our luggage and we started beside the lake bank at Badacsony. 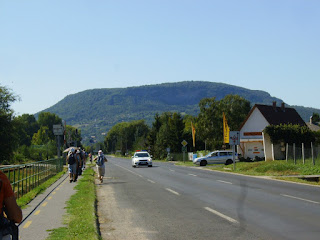 For hundreds of years poets, novelists and painters have been calling the Badacsony and its vicinity the most beautiful landscape in Hungary. One of the greatest achievements of the Hungarian nature conservation movement is that the basalt quarries opened here in 1903 have finally been closed down. The famous playwrighter Ferenc Herczeg made powerful efforts in the Upper House in the 1920s to have them closed. A press campaign was also launched, but the last quarries where only finally closed in 1964. Those on the Gulács and Tóti Hills were abandoned at the end of World War II and in the early 1950s. The Szentgyörgy and Csobánc Hills are more fortunate: their basalt was not found suitable for building purposes, so there are only small wounds on their flanks. The basalt mountains of the area are not only unique and picturesque geological relics, they are also the habitat of many rare plants and animals. In addition to the natural values it is worth to mention the vineyards dating back to the Roman times, the architectural relics of the hills and villages: ruins of castles, churches, palaces, as well as the relics of popular architecture. 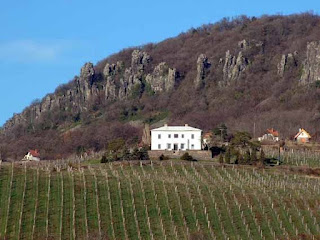 The way was about 10 kms. We walked through the village Balatontomaj, saw
the Catholic Church Szent Imre and we went to the mooring. 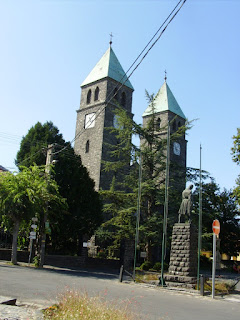 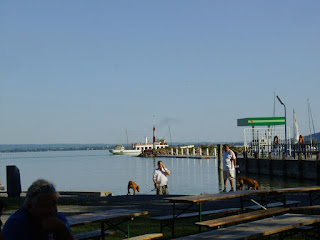 There was a big crafts market here and on the lake bank there were many food stalls with fish meals, desserts, wine and fresh grape juice. We were bathing in the lake, after that we ate a delicious dinner. There was hot summer weather, about 30 degrees.
We went back to our accommodation by train.

On the following day we hiked in Káli basin. It is a very nice countryside. We walked
about 15 kms. 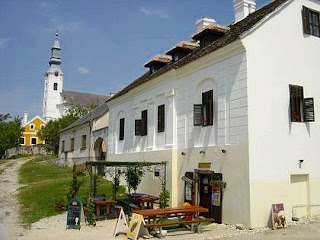 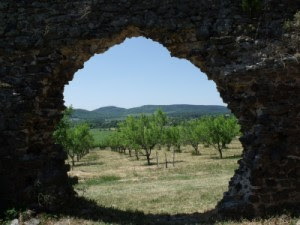 The most characteristic part of the Balaton Uplands was granted protection - perhaps at the last moment - when a protected landscape area in the Káli Basin was established in 1984 on an area of 9,111 hectares. Geological features of the area contribute to its outstanding natural values. Its geological structure is extraordinarily varied: we find Permian red sandstone mountains in the south, huge basalt mountains in the north, sandstone conglomerates in the west, limestone and dolomite in the east and in the middle of the basin. The basalt mountains stretch to the northern edge of the area in a broad plateau, to the valley of the Eger Creek. The bogs of the area are of outstanding botanical value. In the Sásd meadows west of Köveskál, we find the largest population of a rare subalpine primrose; this plant can only survive in cool and humid places. In 1992 nature conservation experts undertook habitat reconstruction by placing wooden locks here, to prevent the bogs from drying out. Since 1983 the directorate preserves the rich flora of the wetland of Tódi-kút in Kővágóörs by a water supply system operated by a wind mill. Floating sphagnum has survived from the Ice Age in two bogs of the basalt plateau of Fekete Mountain. There are several protected orchids, gentian and iris in the bog meadows of the mountain.

There were a lot of places with a beautiful view over the lake. 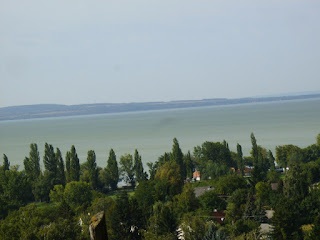 The end of the trip was in Nagyvázsony village. 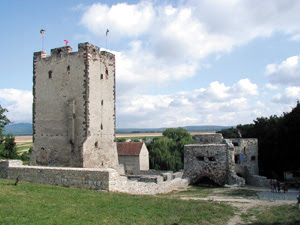 The castle is the 15th century Kinizsi Castle, where Pál Kinizsi, King Matthias well-known general lived with his family. Next to the castle museum you can find a tourist hostel. In the neighbourhood of the castle the Post Museum and the Open-air Museum of Ethnography can be found. The former presents the development of telecommunication, the latter gives an insight into the life and running of the one-time flourishing trade guilds of Vázsony. The late baroque Zichy mansion and the ruins of the Paulite monastery are also worth visiting. Apart from the sights of the cultural heritage, Nagyvázsony offers wine tasting and the picturesque landscape awaits the lovers of horse riding, cycling, hiking, hunting and archery. Several cultural programmes are held in the town. In the summer season Castle festivity is held every day. The church concerts, the theatre performances, the knights tournament are popular programmes. Nagyvázsony is involved in the series of cultural programmes called the Valley of Arts.

Here we saw the castle and we went back by bus and train to Balatonszepezd.
On Monday there was a short walk only, because we needed to return Budapest in the afternoon. We saw the sights in Szigliget village. 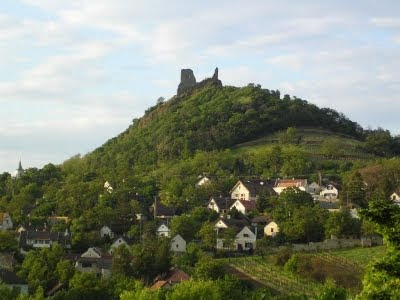 The village of 1,000 inhabitants located in the neighbourhood of Badacsony was an island at the time when the level of water of Balaton was higher. Nowadays its area is a peninsula jutting out far into the lake. There are only a few places in Hungary presented with so much natural beauty as Szigliget. On its rocks you can see the more than 730-year-old castle built by the abbey of Pannonhalma in 1262. The houses of the village with thatched roofs are located downwards from the Castle, graded one under each other, in a semicircular order. New streets down in the valley hidden at the foot of Majális Hill, Kámon Stone, Soponya Top, ´Queen´s Skirt´ and Akasztó Hill, getting down to the lake-shore. A small village with a church had been developed under the Castle belonging to it as usual in the life of a border fortress. The Castle passed into royal proprietorship and then from 1521 for centuries it became the property of Tóti-Lengyel family. The Turkish tried to take the Castle on the top of the steep hill several times but they always failed, however, they burned down all the villages around it. At that time the Castle was the strongest point of the system of border fortresses at North-Balaton; it served the purpose of a harbour for the Hungarian "fleet". Upon the order of Emperor Leopold issued in 1702 the Castle was blown up. The characteristic structure of the village has been saved, the whole internal territory of the village is protected. The Tóti-Lengyel mansion under the Castle was built in baroque style, currently it operates as a restaurant. 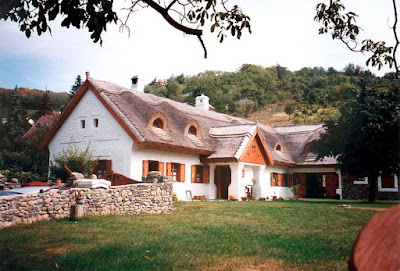 From the village there was a very interesting study trail too. 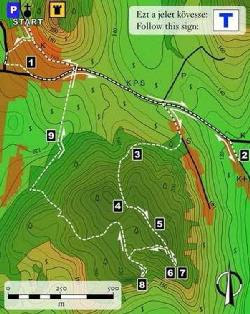 If you take the circular study trail (marked with blue T signs) starting from the church of Szigliget, you can get to know the sights of one of the most beautiful settlements and its surroundings at Lake Balaton with the help of information boards in Hungarian and English. The trail was named after a rock-range revealing the signs of volcanism called Kamon-kő. The walkway runs through the lovely streets of the village enabling you to study the history of folk architecture, traditional viticulture and reed-farming, to look at the ruins of a church from the 13th century. The information boards in the forest present the development of the lake, the native flora and fauna, as well as the major stages of the geological past, the world of formerly active volcanoes. The study trail is 6 km long, the difference in level is 290 metres. This distance can be covered at a convenient pace in 2,5-3 hours including short breaks. 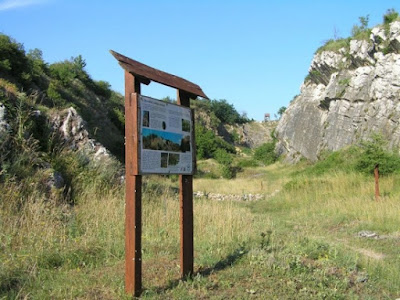 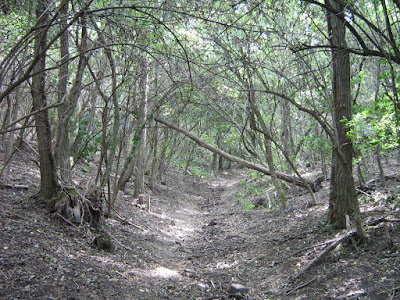 We had lunch at the foot of the castle and after that we went home.
Bejegyezte: Mobi dátum: 3:20 PM No comments:
Címkék: Hungary, Lake Balaton, National Park, travel, trip
Newer Posts Older Posts Home
Subscribe to: Posts (Atom)